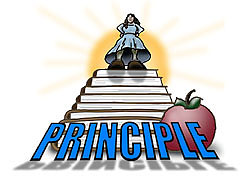 Not many of us would have the guts to give up a regular paycheck on principle, but Pelton did, and she stands on the side of the angels.

It's a simple story:

Pelton, a 27-year-old teacher in rural Piper, 20 miles west of downtown Kansas City, Kan., assigned her 118 10th-grade biology students a semester-ending project: Collect and study 20 leaves, then write a couple of paragraphs about each leaf and deliver an oral presentation. The same project has been part of the biology curriculum for 10 years.

Most of the students completed the assignment honorably; however, 28 turned in work that was almost identical. "They were giving the same report, word for word," Pelton said.

Technology is wonderful, but you wonder if it should be necessary for a teacher to have to use a computer program that checks the Internet to determine whether a student's material is original. Pelton used such a program and verified that the papers were copied from the Internet. She confronted the students.

She also had the good judgment to check with her principal and superintendent. All (except the students) agreed it was massive plagiarism.

District policy is clear: Plagiarism is a zero-sum game, and that's the grade each of the students received. Unfortunately, the project counted for 50 percent of the students' semester grade. Zero on the project equates to flunking the course.

A Smarter Breed of Cheaters Needed

You could have heard the wailing of the students and their mindless, complaining, enabling parents halfway across the state.

You might argue whether any single high school project should be worth 50 percent of the semester grade. However, everyone was fully informed:

All she'd failed to do was require each student to turn in a blood sample. Or, at least, a handwritten, signed definition of plagiarism, to prove that &hellip; well what would that prove, if they'd already decided that cheating and lying and whining and griping and bitching and manipulating was preferable to actually doing classwork?

Ah, but that 50 percent, that was the key. Momma's little darling was going to fail the class because of that damn teacher, and she had no damn business making that damn paper such an all-or-nothing part of that damn class, dammit!

If Principle Isn't on Your Side, Try Politics

So, the parents did what any good, red-blooded American would do: They cussed the teacher, bypassed the principal, ignored the superintendent, and went directly to the School Board.

And hey, you have to hand it to the Piper School District Board of Education: They're not dumb.

Voters &hellip; uh, parents and interested patrons &hellip; came to the Board to tell them of the travesty that was happening in one of their classrooms. The unfairness of it all. The horror, the horror.

The Board changed the policy, so the dishonest little bastards wouldn't fail.

Wasn't that nice of them?

Yep, the Board took its approved plagiarism policy and changed it in a secret meeting (which may have been a violation of Kansas law). Then they decided that the project was only going to be worth 30 percent of the students' grades, not 50 percent.

"They didn't even talk to me or ask my side," Pelton said.

A Reaction of Jerks

Let's see. If you were an honest student, who worked your butt off to get a top score on the 50-percent-of-the-grade project, you now were going to be credited with only 60 percent of your work to placate the parents of kids who had cheated.

Because of you being honest and someone else cheating, you might very well get a lower grade for the whole course as a result of this asinine, ill-thought, knee-jerk decision.

Yes, that's a fine example for the Board of Education to set.

The kids, bless their hearts, understood the educational significance of what had happened. "When they found out, they started cheering, 'We won, we won.'" Pelton said. "I went to my class and tried to teach the kids, but they were whooping and hollering and saying, 'We don't have to listen to you any more&hellip;. Teachers need to realize that we run the school, not you.'"

"They knew if they didn't like anything in my classroom from here on out, they [could] just go to the School Board and complain."

Not all Kansas students are self-centered morons, of course. Many good kids (and, of course, Pelton's teaching colleagues) supported the teacher and lashed out at their dishonest peers and the gutless School Board. They understand that they're going to be competing with cheaters to get into college and elsewhere throughout life.

The kids sure learned a lesson from this one, didn't they?

***
Cheating and lying seem to be in our blood.

High school students surveyed by Rutgers University Professor Donald McCabe last year were candid: 74 percent had cheated on a test; more than half had lifted copy directly from Web sites; 15 percent had turned in entire papers that they had copied from the Internet.

George O'Leary held on to his new job as football coach of Notre Dame for about 15 minutes after lies on his resume were discovered. Best-selling historian Stephen Ambrose has admitted lifting sentences from other authors without attribution.

And don't get me started on lying by executives at Enron and other troubled companies.

We all know what happens if we plagiarize in the communications profession, don't we? The answer requires that we either have a good insurance policy or a very large bank account.

Get caught by someone with deep pockets and a raptor for a lawyer, and you'd be thrilled to get by with only an F for the semester.