Is failure to use someone's preferred pronouns defamatory, or a micro-aggression? What if someone (or some company) demands that I use certain pronouns against my will? Is that a micro-aggression against me? This issue cuts both ways, and can be expensive, as an Ohio university just found. Pricey Education

Brian Stelter has been fired at CNN, so now Howard Kurtz of Fox News has the only regularly scheduled media analysis show on television. Kurtz handled his rival's departure with class; Stelter didn't. And now Greg Gutfeld is sad.
Brian Buzzed

Elon Musk stretches the definition of "high" with marijuana and his planned SpaceX (could anything be more appropriately named?) private passenger moon circuit. Space Cadet

It really isn't fair to pick on sportswriters' misuse of the King's English, but it's so easy, like throwing an M-80 into a barrel of fish.  What has become of the honorable profession of copyediting?  Couple Examples'

Ever fill out a form on a computer?  It can be easy, straightforward, intuitive.  Or the form may have been programed by a monkey.  Enforced Clairvoyance

Get Your Assets in Gear

Screwed-up headlines are fun to catch, not so much fun if you're the one who wrote them. Assets. Hand jobs. Disks. Red tape. Go ahead, submit your favorites. Dead Heads

Every election, we're admonished to be sure to vote, because an election can hinge on a single vote.  We guess that's true, but more often, it isn't.  And it certainly isn't as much fun as finding out how many dead people are voting.
Ghost Writing

President Trump and the Independent (?) Media 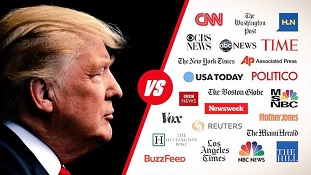 Clearly, their perceived self-importance overwhelms any possibility of a sense of humor. Media Omphaloskepsis

Your Vote Matters ... Even When it Doesn't

Many television and radio "talking heads" have proudly announced that they aren't going to vote in Tuesday's election, because they're disdainful of the Presidential choices.

Don't be taken in by this arrogant approach; there are many other important races -- Senators and Representatives and many local elected positions -- and lots and lots of state and local issues, too. Votes Matter

Some folks believe we're doomed, no matter what the results of the 2016 U.S. Presidential elections. Others find the whole thing highly entertaining, if a bit disgusting.  Liberal fanboys say, "Oh, wrong computer equipment. No harm, no foul."  But if you understand anything about classified information, and the enormity of the foreign powers' successful hacking regimes, the significance of many thousands of intercepted emails is clear. And frightening.
What, Me Worry?

We've Upgraded; You Should, Too

What's the big deal with the upgrade of CornerBarPR.com® to version 2.0?

Oh, my. You might have to upgrade really old browsers, but now you can access us on all the Internet devices -- desktop computers, laptops, iPads, cell phones. And CornerBarPR.com uses the latest rendering (HTML 5) and encryption (TLS 1.1 and 1.2) standards and technology, which gives you a far better user experience and wildly enhanced safety and security.

With this technology, we -- and you -- can ward off both the NSA and your boss. Attacked by Technology

And for all those suppliers who have been trying to sell us search services or site optimization or marketing consulting, that's a bad thing. As it is for those who want to sell us promotional products or sales tools (or, certainly, those folks who believe our personalities need a makeover!). Because we're in the midst of a major site overhaul, and certainly don't want to promote the current version of CornerBarPR.com® until more of our improvements are in place.

We've posted this notice before, but it appears that suppliers and marketers don't bother to read our site before blindly sending us promos, ... so we'll give them another chance. Lousy Timing

Scratched on the BarRoom Wall