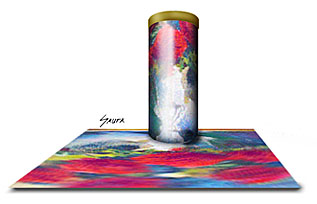 Ever know someone who had the answer?

Someone who decided that precisely one thing in the grand scheme was so important that nothing else mattered?

Then you've met the "single-issue idiot."

Now I'd better define my terms, before I start insulting regular idiots.

You know the issues:

Well, maybe there's one we can all agree on: the IRS.

I make no pretense that the list is complete; you can come up with others. But it'll work fine as a starting point.

These are issues on which some significant body of people is convinced that they have received divine inspiration.

One Thought Is Enough

I'm not talking about your typical loudmouth who has an opinion about everything, but, rather, the person all of whose opinions are about precisely ONE thing.

Don't they make life fun for the rest of us?

Perhaps you remember Jon Saura's illustration from last week's Commentary: an ice cream vendor who nods approvingly as a sidewalk orator holds forth on the evils of the day -- until the speaker shouts, "Down with ice cream!"

If it's your ox getting gored, the opinions seem less reasonable.

That's not to say that there aren't individuals who justifiably hold certain issues paramount because of timing or events in their lives or other special circumstances: MADD is a good example. But, except for a limited few members, their issue rarely dominates their entire lives 24/7/365.

Passion is one of the documented characteristics of many students identified as gifted. They often are more sensitive to social issues. While the other kids are focused on themselves, gifted kids are able to see the world from someone else's perspective; because their minds grasp information so quickly, they see complexities and injustices that less-sensitive, less-aware kids will miss.

Of course, this also can be a disability. And the adult manifestation turns it into a pathology, where they're unable or unwilling to entertain any other point of view. To a hammer, everything else is a nail.

Once you've made the single-issue decision, it gives you tunnel vision, a focused, but distorted, view of reality.

Perhaps you've heard of anamorphic art, a distorted image, which, when viewed from a different perspective, is brought back into a normal shape. It is literally "formed again." Standard anamorphic images are so heavily distorted that they cannot be recognized unless you look at them in a curved or cylindrical mirror.

Today, the best our artists can do is a crucifix suspended in a vial of piss.

Our single-issue friends view the world through a similar prism: No matter what the true image, they see a pre-determined outcome.

The problem is, these people vote. They buy products. They buy stock and show up at shareholders' meetings.

They are absolutely convinced that they are morally superior. It is not that they don't respect other people's points of view, they don't even see or give a damn about the other point of view.

And, more to the point, they hurt other people.

Like the self-righteous animal rights activists. They throw paint on people's fur coats and release laboratory animals, because they've come to the conclusion that screwing up vital medical research somehow helps lab rats and fuzzy chinchillas and snarling mink.

Cosmetic testing, maybe. But if my sable coat is the victim of a terrorist attack, I'm simply going to go to my insurance company and let them buy me another. All that nets the animal rights zealots is more work for the sable-skinning industry.

We hear stories -- could they be true? -- of fanatics who will burn down a factory and cost poor people their jobs because they are offended by the working conditions.

Is it better to work in bad conditions for low wages, or not to work, because some errant do-gooder has destroyed your place of employment?

Sitting in suburban America or an Oregon college town, it's pretty easy to make these judgments on behalf of someone else, isn't it?

Quoting Dave Barry: "The main accomplishment of almost all organized protests is to annoy people who are not in them."

In 1775, at The Second Virginia Convention, Patrick Henry thundered the oft-quoted words, "Give me liberty or give me death!"

That may not have been Henry's single issue -- it's more like a campaign slogan, really -- but he certainly had the necessary single-minded passion to inspire others to believe in his cause.

Next week, in part 2 of this Commentary, we'll look more closely at close-minded, radical commitment to unthinking responses in a complex world.