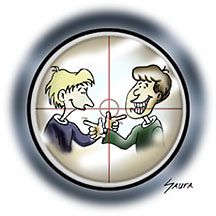 A couple of tykes in New Jersey have been kicked out of kindergarten because they played cops and robbers, and held their fingers in the traditional kid's-hand-as-a-gun position and engaged in a mock finger-pointing shoot-em-up with one another on the playground.

Elsewhere, a Texas honor student and all-state swimmer was expelled because a butter knife had fallen from his grandmother's belongings (being taken to Goodwill, as if it mattered) into the bed of his truck.

No, he didn't threaten the principal or classmates with his knife-wielding pickup; it was sitting peacefully in the school's parking lot, 100 yards from the school, with the butter knife -- that's a butter knife, okay? -- harmlessly lying, forgotten, in the truck's bed.

Well, you say, someone else could have gotten it and created mayhem on school grounds. And you'd be right.

Just as you would if you'd said any one of dozens of kids with 3000-pound automobiles could have run down someone on school grounds who had dissed them or their girlfriend or someone from their 'hood. Or stabbed them with a Bic.

A car certainly can be used as a weapon. Or as transportation. And a knife may be a weapon, or it may simply be a tool for eating food.

I'm Mad As Hell, and I'm Not Going to Take it Any More!

As I researched this topic for today's commentary, I got madder and madder. If I were a student, the subhead above would have gotten me both an expulsion and a couple of days' interrogation by local police in the post-Columbine threat-awareness frenzy.

And what nefarious evil-doers are they catching with their absurd zero-thinking policies? Normal kids doing normal kid stuff.

I Couldn't Help Myself

Kids, of course, have no choice when confronted with authoritarian, zero-tolerance, single-issue idiots who gleefully recite the "no-discretion-it-was-in-our-written-policies" mantra. They can't do what you and I would do, and say, "Fu@# you. I'm leaving and going someplace where adults are in charge."

No, they're stuck, with graduation blown, a police record, and college scholarships a wasted dream, because they had the incredible bad fortune to have cramps and brought a Midol to school or doodled a picture of a gun or a stick figure with an arrow through its head on the back of a test paper.

In our profession, we like to think of the First Amendment to the U.S. Constitution as having some applicability to our lives. Of course, the Constitution has been found not to apply to kids in school. Free speech, privacy, due process, search and seizure, freedom of religion: Kids can't expect any of these guarantees because of court rulings and in loco parentis and equal access doctrines.

Equal Stupidity Is the Goal

It's okay to search a locker or a kid or to censor articles as long as you're not targeting a specific kid, as long as you act equally stupidly with all kids.

I've done a good bit of consulting work for public school districts, and several friends are school communicators. But I'd be loath to take an assignment to use my communications skills to defend application of such a horrid policy of wild overreactions.

The idiots in charge of our local schools have given us plenty of additional zero tolerance lunacy. In probably the most widely quoted piece on the subject, "Can Punishment Lead to Safe Schools?" in the Phi Delta Kappan, Russ Skiba and Reece Peterson include the following table:

Copyright 1999. Phi Delta Kappa International. Used with permission.
*I'll take the blame for the final column of the table.

Skiba and Peterson give other examples, but you get the idea.

The road to hell is paved with the good intentions of school policy-makers, aided by helpful teachers.

Of Course We Should Use Protection

Of course our kids and our society need to be protected from sociopaths. But a one-size-fits-all "solution" certainly solves nothing; zero tolerance equates to zero intelligence.

I'm glad I write a weekly commentary, because I'm angry and I want to get this out of my system. It's going to take one more week of terrible examples -- I've saved some of the best ones -- before I calm down enough to finish this commentary and say anything the least bit thoughtful.

In the meantime, I hope these incredible policies offend you as much as they do me. Send me your opinion of single-issue, zero-tolerance zealots.

Even if you disagree.