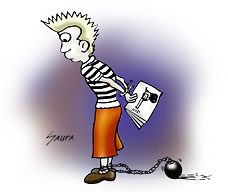 Under the guise of apparent evenhandedness, application of these idiotic policies is inherently unfair. The Web site Zero Tolerance = Zero Common Sense = Zero Justice says it far better than I could: Such abrogation of common sense represents "intentional self-lobotomization on the part of school administrators."

The idea behind zero tolerance came from drug enforcement policies of the 1980s. Originally, it referred to punishing all offenses, no matter how minor, with equal severity.

Hmmm. It still does.

Anyone who has ever managed people knows that treating everyone exactly the same is about the dumbest policy you could develop.

No, anyone with an ounce of sense knows that, in an organizational setting, you look at the circumstances, apply a little experience and judgment and thought, and deal with every person and incident individually, recognizing differences, and distinctions, and nuances, so you can achieve the best possible outcome.

Show Me Your Tool

It is only if you personify the Peter Principle, have risen above your level of competence, and have absolutely no self-concept or self-confidence, that you would ever consider an arsenal consisting of a single weapon -- excuse me, a single tool -- as a justifiable position.

It is as absurd as saying a news release is the answer to every communication problem. The boss has ruled: You can only use one tactic, no matter what the issue.

There are still unthinking teachers and administrators and Board of Education members and citizens who believe that an equitable education means doing exactly the same thing for every student. Surely no College of Education teaches this alarming idea!

Forrest, You're No Einstein!

Do you really think an emotionally disturbed, behaviorally deficient student with a low IQ, and an under-prepared student who was unjustifiably peer-passed, and an average kid, and a gifted student in the top two percent of the entire school district should receive absolutely equal educational treatment?

No, if you had an ounce of fairness and really understood the concept of equity, you would give them a differentiated, educationally appropriate curriculum that directly related to their abilities and backgrounds, and that stood the greatest chance of helping each of them achieve as much as he was capable of.

You would demonstrate flexibility and take the differing facts and circumstances into account.

Just as you should with a kid who has a penknife for show-and-tell, compared with those sick little murdering assholes in Littleton, Colo. Surely even the single-issue, zero-tolerance boobs in school systems across the country can see the difference.

A school district has a perfect right to protect students, to prevent riots, and fighting, and abuse, and obscenity, and general unrest. If my kids went there, I'd damn well demand that they assure my kid's safety and evenhanded treatment.

Adult Supervision Would Be Nice

But when decisions were made about my kid's and my neighbors' kids' well-being, I'd like for an actual adult to be in the room, not an unthinking automaton.

As Ronald Stephens, executive director of the National School Safety Center in Westlake, Calif., puts it, "Zero tolerance simply means all misbehavior will have some sanction. It doesn't mean you bring the maximum punishment for every transgression." I guess this bleeding-heart liberal would be against the death penalty for shoplifters, too.

The National Education Association opposes zero tolerance "in general," calling for case-by-case consideration by teachers and administrators using their knowledge of the students and the situation before determining an outcome. The American Federation of Teachers, which originally supported zero tolerance, now opposes it. The American Bar Association has also come out in opposition to the policy.

What? No Drugs? Now That's Going Too Far!

Supporters of draconian zero-tolerance policies say the outcome may be painful, but school officials need to send the message that drugs and weapons have no place in schools.

But the next time some stupid principal tries to expel a kid because she said bang-bang with a leaf, I'd really, really like to be on his review committee. Then we'd see who gets suspended ... or expelled.

If you want to do a bit of research on the subject, or if you want to make yourself as mad as I am about zero-tolerance policies, check out "Our overlawyered schools" at Overlawyered.com.

Next week, I'll conclude this series about single-issue idiots wearing blinders in a complex world.