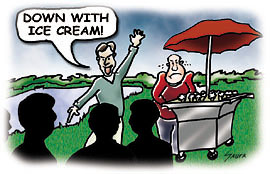 Orwell's 1984 seems to be alive and very well in Missouri, thank you.

The Thought Police of the Missouri General Assembly, in all their petulant glory, have reduced the budget of the University of Missouri-Kansas City by $100,000 because they didn't like something one of the UMKC faculty members wrote.

Associate Political Science Professor Harris Mirkin has received so much media attention from a three-year-old article relating to his research area, a theory of sexual politics related to general societal belief systems about pedophilia, that you'd think he'd hired Brenda to beat the bushes for him.

Details of Mirkin's research and the Missouri legislature's reaction are available elsewhere, but one general idea in his article is that maybe, just maybe, intergenerational sex isn't any more deviant than homosexuality or female sexuality, which for many years were issues equally taboo and impossible to discuss without generating a lynch mob or fire-bombing.

Pedophile panic is such a popular topic in our country these days, because of the sad events unfolding around the American Catholic Church. Media are looking for any possible new angle. Sure seems they found one, in a 1999 article in an obscure journal.

The important issue here is the conservative legislature's knee-jerk reaction to an article few of them have read, using the not inconsiderable power of the purse to promote censorship and their own political agendas, with little regard for a university's high traditions of academic freedom, free speech, and the investigation of ideas and unpopular points of view.

Be Careful What You Wish For

When University Chancellor Martha Gilliland came to UMKC and announced that the institution should gain coverage from publications like The New York Times, she probably didn't have this in mind.

UMKC has been covered by damn near every ink- and electron-stained wretch this side of Hoboken, including this The New York Times article, The New Yorker magazine, the Washington Post, London's Independent, and on-site interviews by CNN, as well as an interview on The O'Reilly Factor. The BBC is coming in town next week to interview the Chancellor and Dr. Mirkin.

Gilliland has been appropriately obsequious to the gods of academic freedom, and has supported -- indeed, defended -- Dr. Mirkin's right to talk about unpleasant topics while, at the same time, holding her nose just a bit.

Listen to What I'm Saying

In 1984, George Orwell became the ancestor of the current Missouri legislature with his fantastic, frightening vision of a society in which language is used to control thought.

It's something many communicators aspire to. If we're really good, really slick, we can make inroads toward controlling agendas and outcomes through skillful application of words and images.

In the totalitarian language "Newspeak," Orwell coined the term "doublethink": "the power of holding two contradictory beliefs in one's mind simultaneously, and accepting both of them." As in the CornerBar, gin was the lubricant of choice, dulling thought and dissipating rebellion.

I Think, Therefore I Am

The idea was to reduce the range of reflection by reducing available language and definitions. Words were redefined -- often into their opposites -- or eliminated from dictionaries and everyday discourse. If there was no word for a thing, there probably was no way you could think of or maybe even do that thing.

The Missouri legislature isn't simply reading that book; they're living it!

If we have our way, pedophilia will not only never be studied again, it will never even be mentioned again, say these enlightened solons.

But suddenly, in a flip-flopped doublethink with a cartwheel and a full gainer thrown in, the concept has been turned on its head! The idea behind doublethink -- not the legislature's "no think" -- has, in some circles, changed from a pejorative to a compliment, a sign of intelligence. Orwell would be proud.

Carly Fiorina, Chairman and CEO of the new HP, talks of her company as one that emphasizes invention. She believes that innovation can come from the ability to hold opposing thoughts simultaneously; as the conflicting ideas rattle and churn and rub up against one another, the friction creates insight.

Theologians and philosophers consider it a sign of intelligence and even genius to simultaneously understand and deal with two apparently opposing thoughts and still be able to function. To be able to hold a meaningful discussion with the proponents of both views is a sign of cerebral and emotional maturity.

The Luddite Missouri legislators who decided to let unthinking popular politics rule over rational thought will never be in any danger of being labeled intelligent or emotionally mature, much less geniuses. They want no part of any idea that conflicts with their preferred world view, thank you.

As Long As It's Not OUR Ox &hellip; Or Jackass!

There's a speaker -- a beatnik, as I recall -- standing on a park bench before a small gathering listening to him condemn the evils of the day.

Vendor finds himself nodding in agreement, until he hears the speaker's next target: "Down with ice cream!"

"Bullshit!" he thinks, and he turns and goes on his way.

The state symbol of Missouri is the mule.

[For the record, the author's wife is on the faculty of UMKC. However, she does not personally know Dr. Mirkin.]