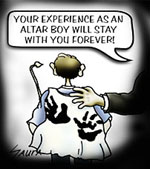 It's such an easy target.

And such a sad one.

Anyone with a television or newspaper or magazine or telephone or access to smoke signals already knows of the incredible difficulties the Roman Catholic Church has brought upon itself. People are coming out of the woodwork, telling of the sordid liaisons, of fruitless complaints about compulsive molestation of children, brushed aside by church leadership.

I don't need to recount the astounding number of maddening, saddening deeds.

Even if they do make me want to haul off and slug someone. Or worse.

I do know that, no matter how fervent and inspired and prayerful the spiritual life and practice and belief, temporal yearnings and temptations can become -- or seem -- overwhelming.

That said, where is the church leadership?

For years, they have swept accounts of priests -- using their position and influence to proposition children -- under the rug. They have buried their heads in the sand, looked the other way, and tried to keep these occurrences from public exposure. Whether it's conspiracy or excellent communications skills -- could they be getting high-paid, behind-the-scenes advice? -- they've done a fine job of mostly keeping this issue out of the media limelight.

Presumably, they did a few things out of the public eye to track down and ameliorate the problem, but what we hear about are the failures, the concealment and suppression and misdirection. Just like in the corporate world.

Of course, there were actual efforts to get a grip on the problem. Offenders were required to do penances, undergo spiritual renewal, and receive counseling and psychiatric therapy. Yeah, that oughta do it.

Then these perverts frequently were sent to another parish, with a new crop of kids and the best hopes of the church leaders. Transfers without accompanying information; predatory, pedophile priests unleashed anew upon trusting, unsuspecting parishes and the children of devout, loving, authority-fearing Catholic families.

Church leaders blithely moved one former priest, now accused of molesting more than 130 people, from parish to parish, Johnny Appleseed-like, for decades, even though they were well aware of the trail of allegations of sexual abuse.

[Yes, I know the Johnny Appleseed analogy is tasteless. So were the actions of this pedophilic son-of-a-bitch.]

If it were only the lawsuits and embarrassment, that would be bad enough. But the real catastrophe -- beyond the individuals hurt -- is the shaken confidence in the American Catholic Church, a body that should represent the highest moral and ethical standards, and, to a lesser extent, the tarring spill-over effect on other religious institutions.

After decades of cover-ups, ostrich-like posturing, and terrible decisions within the church hierarchy, finally the elephant in the tent became too big to ignore.

Let's Keep It Just Our Secret

Secrecy seems to be part of the package here. For years, police departments across this fine land looked upon priestly sexual abuse as an in-house problem, shelving investigations of clergy and cooperating -- conspiring? -- with church officials by turning complaints back to them, to be dealt with internally.

And where were the vaunted investigative media? Is the church too hot to handle?

In only the second special, one-country-only meeting of cardinals in the church's million-year history, the Vatican finally summoned U.S. church leaders for a discussion. (The first such meeting also was with those uncontrollable Americans a few years back.)

In an incredibly unfortunate choice of language -- could it have been the translation? -- the Pope told the cardinals he would no longer tolerate pedophile priests.

It's Not My Problem

He said it was a "symptom of a crisis affecting not only the church but society as a whole."

I don't think so, Your Holiness. Society as a whole is not molesting young children.

Of course, he also made wholly appropriate remarks:

I too have been deeply grieved by the fact that priests and religious [sic], whose vocation it is to help people live holy lives in the sight of God, have themselves caused such suffering and scandal to the young.

Because of the great harm done by some priests and religious [sic], the church herself is viewed with distrust, and many are offended at the way in which the church's leaders are perceived to have acted in this matter. The abuse which has caused this crisis is by every standard wrong and rightly considered a crime by society; it is also an appalling sin in the eyes of God. To the victims and their families, wherever they may be, I express my profound sense of solidarity and concern.

People need to know that there is no place in the priesthood and religious life for those who would harm the young.

Yes, that's a good point. The phrase, "First, Do No Harm" (or "Above All, Do No Harm") is widely attributed to the Oath of Hippocrates. Although that's not exactly what it says, it's a good enough admonition for doctors and not a bad one for the Pope to be passing on to his clergy.

Another natural question arising from vows of celibacy and a male priesthood was dealt with head-on by Bishop Wilton D. Gregory, President of the U.S. Conference of Catholic Bishops, who spoke of the "struggle to make sure that the Catholic priesthood is not dominated by homosexual men."

"Not only is it not dominated by homosexual men," Gregory said, "but to make sure that candidates that we receive are healthy in every possible way -- psychologically, emotionally, spiritually."

At least here the church is dealing with presumably mature adults, so this particular temptations-of-the-flesh issue doesn't involve a crime against children, only sin, moral breakdown, and violation of church law and authority.

We have that idiot, The Reverend Fred Phelps, the intolerant, hateful Topeka, Kan., preacher and disbarred lawyer, whose homophobic Westboro Baptist Church has picketed the gay community, Jews, and people of other races, among other obvious sinners, at hundreds of events nationwide. He even lashes out at other Christian religions that don't meet his exalted standards. He hasn't yet spoken out on people who limp; maybe there's a minority he's missing.

The Things We Do to One Another

But in the name of God we kill and fight and hurt one another.

In Northern Ireland, it's the Catholics versus the Protestants, for the love of God.

Israel versus the PLO, for the love of God.

China versus any religion that it runs across, for their love of God.

And crazy Muslims versus the rest of us (and the rest of the Muslim world, too) for the love of &hellip;

Well, I simply can't bring myself to say that what that bastard Bin Laden and his misguided or malevolent colleagues have done to the rest of the world is for the love of anything but their tragically warped hallucinations that no one else can see.

It seems so fitting that a good Texas friend just sent me the following:

Three men are sittin' on a bench.

One's a Texan wearing a Stetson, one's a Muslim wearing a turban, and the last one an Apache with an eagle feather woven into his hair.

The Indian is rather glum and says, "Once my people were many, but now we are few."

The Muslim puffs up and says, "Once my people were few, but now we are many millions."

The Texan adjusts his hat, finishes rolling a smoke, leans back and drawls, "That's 'cause we ain't played cowboy and Muslims yet."

***
Fortunately, these commentaries don't have to be politically correct.