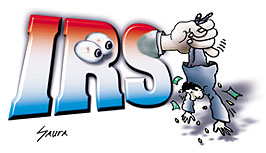 Well, here we are, at the annual terror the Infernal Revenue Service inflicts on otherwise law-abiding U.S. citizens.

The Concrete Sequentials among you have completed your taxes, triple-checked the figures, actually signed the form, sent it in, processed your on-line refund, and are sipping mint juleps on the veranda.

The rest of us -- and even many of those over-organized, taxes-complete, Type A++ tight-assed CS's -- are once again beginning to fume about the party our government -- that's our government, yours and mine, right? -- throws for us each year.

Why should any citizen have to fear their government? Why does our country do this to us?

What an Adrenaline Rush!

The fu@#ing IRS begins carrying out its annual campaign of fear and intimidation in the nation's media each year during the six weeks leading up to April 15. Their magnificent publicity machine gets rolling, and we hear and see wave upon wave of stories about tax cheats, informants, fines, penalties, interest, confiscations, bankruptcies, and jail sentences.

You'd better watch who you piss off, because informants are much more likely to be believed than you are, and you may get the opportunity to spend thousands of dollars regaining control of your life and defending a baseless claim in a civil or criminal investigation.

I'm not a reactionary like those folks living in barricaded compounds in Montana and Idaho, but every year at this time I have a better understanding of their loathing of an uncontrolled government agency that uses incredibly abusive tactics against law-abiding citizens.

We wouldn't accept this treatment from a supplier, a partner, a customer, or, indeed, from any other government agency who didn't approach us with a badge, a gun, and body armor, so why do we accept it from the fu@#ing IRS?

'Nice Auditor' Is an Oxymoron

My CPA tells me that some auditors are competent and that not all are malevolent. I wouldn't know; in my 15 or so audits (see Surviving the Annual IRS Terror), I've never encountered one of those rare birds.

Ah, but they're not really abusive. They're just overworked.

Overworked? The fu@#ing IRS is the largest agency in the Department of the Treasury, with about 98,000 employees and a budget of $8.2 billion!

We're paying our tax collector an incredible $8.2 billion dollars, when all of our nation's revenue could be generated by a value-added tax or national sales tax using infrastructure that already exists in most states, saving billions and throwing a bunch of otherwise useless lawyers and accountants and fu@#ing IRS employees out on the market ... where they could see if they could figure out how to earn an honest living like the rest of us.

Representatives W.J. "Billy" Tauzin (R-LA) and James A. Traficant, Jr. (D-OH), have slowly been maneuvering their "Dump the IRS" proposal through the furious lobbying of Washington's entrenched interest groups. I'm sure they would welcome your support.

Commissioner Charles O. Rossotti -- why don't you give him a call or drop him a note? -- who heads the fu@#ing Internal Revenue Service, has pledged to turn his agency (I have real trouble calling it a "service") "into an organization that will consistently provide top-quality service to America's taxpayers." He says the agency has one of the most demanding jobs in the world.

Well, if they had the foggiest notion how to do it right, he'd probably have a point.

You're Responsible for Knowing 2.8 Million Words on 6000 Pages

Turns out that the complete United States Internal Revenue Code, Title 26 of the U.S. Code (26 USC), is more than 21 megabytes in length, and contains more than 2.8 million words; printed 60 lines to the page, it would fill almost 6000 letter-size pages.

Approximately 10,000 customer service representatives -- now there's a nice, friendly-sounding title for the incompetents that answer the phones -- field questions from taxpayers on everything from tax law to refunds. During the 2001 tax-filing season, the IRS received approximately 70 million calls from taxpayers on its toll-free help lines and answered more than 50 million of those calls.

Wow! A 71 success rate! Of course that counts a "success" as someone merely answering the damn telephone. If only their responses were that accurate.

I won't even go into the length of time callers had to spend on hold.

Their target for accuracy is a measly 82 percent for questions about tax law -- the ones that make the biggest difference to most people who call -- and they don't even attain this.

Let's see: 71 percent of the calls actually get answered; 79 percent of those are deemed correct by an organization that has an incredibly vested interest in the outcome being as high as possible. That means maybe 56 percent of the people who called got a partially correct answer to their question. They say.

Yeah, I could stay in business doing that. I think I know how they'd react if your tax return was only 56 percent correct.

Eva Rosenberg, MBA, EA, has a nice little Web site, taxmama.com, which offers excellent tax info for small businesses. Be sure to read her article, You Can Ask the IRS a Tax Question, But Don't, dealing with what the fu@#ing IRS calls "customer service" and the accuracy of their responses.

Anyway, let's say you actually reach a human being and ask for their advice. Folks who have been fully immersed in that brain-hardening, eye-scaling tele-prayer experience tend to make three phone calls and take the average of the answers. Recording the phone call may help, if your jurisdiction allows that, because the fu@#ing IRS won't back up what its people tell you -- hell, it won't even back up its own publications!

That's right, they readily admit that their publications aren't accurate and that, if you rely on the publication and it's wrong, you're wrong. You should have known better. They make the mistakes, and it's you who owe the penalties.

Even when they admit error, have you ever tried to get them to correct one? It's almost as bad as submitting yourself to an audit or an autopsy.

Maybe, just maybe, you can argue them out of the penalties, if you can reach the right person, and they don't lose your paperwork, and they actually do follow up to your request, and you respond with all the extra documentation they demand, and they don't lose that, and they eventually process the damn thing. But why should you have to?

It isn't your fault or mine that the damn government has antiquated computer systems and incomprehensible laws and regulations and incompetent personnel. Why should we be the ones to suffer when we're doing our part right?

With Commissioner Rossotti's friendlier fu@#ing IRS, rather than you running your business and reporting on it, you're told exactly how you must run your business -- for their convenience.

They are so friendly as they rigorously enforce their 6000 pages of code. And they certainly don't want you to understand the fact that code and court precedence are the only things really enforceable.

They are so friendly that you have to have a CPA, a bookkeeper, a knowledgeable financial advisor, a phalanx of lawyers, and a triple prescription of Valium just to run a one-person business.

I'm pretty sure the members of the U.S. Congress Joint Committee on Taxation would love to hear your comments on the friendly fu@#ing IRS experience.

I'm from the government and I'm here to help you.

If that bastard Bin Laden had wanted to disrupt the functioning of the U.S. economy and government, I wonder what would have happened if he had chosen to crash airliners into the friendly fu@#ing IRS headquarters and their storage and processing facilities around the country? Lower visibility, perhaps, but broader turmoil.

Would it have been a catastrophe? Or a blessing?