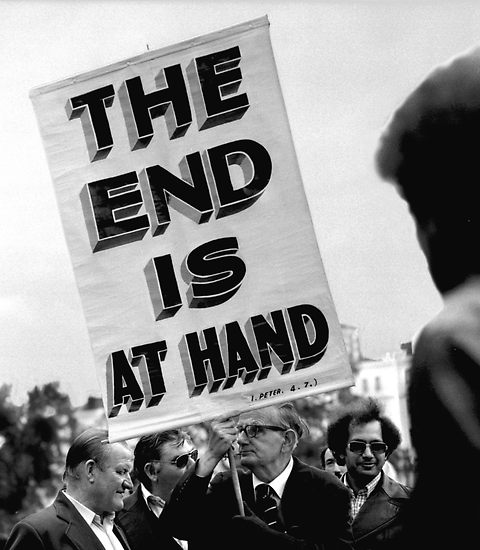 A friend offered a two-word summary of the 2016 U.S. Presidential election:  "We're doomed!"

Maybe so.  Here are a few random thoughts ...

The Chief Curmudgeon is amused and entertained, not only by the election but also by peoples' reactions to it.

In an article in The Kansas City Star, University of Missouri professor Bill Horner offered "three criteria for a good election: Candidates must talk about issues, the media must cover that discussion and citizens must pay attention."

Well, we don't appear to be succeeding:

The media have decided to cover the latter insubstantive discussion, which they find far more titillating and circulation- and viewership-boosting than issues.

And the citizens are paying attention to what the self-indulgent media are telling them, without bothering to try to learn much about the candidates' ideas and positions.

WE WILL BE EQUALLY ENTERTAINED AFTER THE ELECTION; THE NEWS ABOUT WHOMEVER IS ELECTED CERTAINLY WON'T STOP!

I'd say all three are at fault.

I suspect most of us will be equally entertained after the election ... and likely annoyed and angry and frustrated. Because, for sure, the news about whomever is elected certainly won't stop.

If Donald Trump is elected, we'll need a fainting couch for the liberal Democrats -- and the media -- as well as an open highway to Canada and lots of ice, to accompany us on what obviously is a trip into hell.  For sure, they'll say 'we're doomed.'

If, instead, Hillary Clinton wins, 1) Trump's supporters will assure us that the election was rigged, and, 2) because we've elected a crook, there will be hearings and, likely, prosecutions.  Is it simpler for President Obama to pardon her now, or should we wait for her inauguration and indictment, so she can pardon herself?

In a letter to that same Star, someone calling herself Patty Nolte wrote, "...I know a lot of people who feel they are entitled to break rules but none are running for office. With the server it was a stupid, stupid thing to do. Clinton very publically apologized more than once on using the private server."

The Curmudgeon, who knows how to spell 'publicly,' replied:

THE INFORMATION INTERCEPTED IS WHAT IS SIGNIFICANT, NOT USE OF A 'PRIVATE SERVER'

But using a private server isn't the issue. Exposing classified and important governmental information to hacking by foreign actors is far more serious than simply, "Oops! I used the wrong piece of equipment."

Latest information from the Federal Bureau of Investigation acknowledges that Hillary Clinton's email server was hacked -- possibly, they say, by as many as five foreign powers.

The information intercepted is what is significant, not merely that Mrs. Clinton sent and received information from the wrong place.

A former First Lady, Senator, and Secretary of State certainly should have known better.

And finally, an article, "FBI investigating new emails for classified information," led to the following thoughts:

"Among other things, the article said, '[Hillary Clinton presidential campaign chairman John] Podesta says he is confident the new information will not produce any conclusions different from the one the FBI reached in July ...'

Turns out, that was a pretty good question.

"The FBI never said she was careless with 'Highly classified information' as [House Speaker Paul] Ryan claimed. She mishandled documents not clearly marked classified, but getting Hillary haters to understand that is impossible."

John, most folks who have been in the military, or in certain levels of government, certainly know what is, or should be, classified on sight, clear markings or not. I certainly would expect a former First Lady, a former Senator, and the Secretary of State to have this minimal understanding.