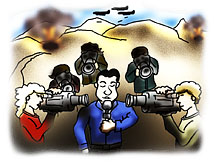 There aren't adequate words to discuss the kidnapping and murder of journalist Daniel Pearl; nothing will serve as an adequate expression of comfort to his family and friends and unborn baby. Barbarous acts cannot be explained away by any sort of reasoned, logical analysis or well-meaning but ultimately unsatisfying platitudes.

In a sense, of course, the obsessive, excessive media coverage of this murder is a tribute to a colleague. The media look out for their own.

But -- and, curmudgeon or not, I mean absolutely no disrespect to Pearl or his family or his colleagues -- it's the baby-down-the-well syndrome.

Sometimes an event happens that, while significant to the participants and those close to them, is fairly meaningless in the total scheme of things.

When the baby falls through a hole in the cover of a cistern and is stuck at the bottom of a deep, narrow well, Herculean efforts are mounted for the rescue. Family and friends and gawkers huddle together, watching emergency crews use first heavy equipment, then hand tools, as they approach the child's location.

It is -- at least, it becomes -- a made-for-television event. News bulletins and progress reports are posted throughout the day and night; if someone were to light a match to the empathy oozing across the nation, we'd be engulfed in a firestorm.

And for what? Some unlucky kid fell down a well.

It's News Because of the Cameras

Sure I'm familiar with the parable of the lost sheep, and the joy expressed when something or someone lost is found. But it's only one kid -- one kid out of 6.2 billion people on earth. Almost like a grain of sand on the beach. To momma and granny and the fawning babies-as-a-religion-unto-themselves lobby, the kid is the most important thing goin'. However, in reality, many more horrific things happen each day. There just aren't cameras around.

Hey, we may not like the crap they put in front of us, but network news executives certainly know what sells, what grabs and holds an audience.

Give 'em a kid in a well any day over the economic collapse of a major industrial power!

But a dead journalist! Wow!

Happens there's a war going on in Afghanistan. People are killing one another.

If a helicopter full of Marines crashes, it'll be a story for two days, tops. But let us lose a reporter, and it's headlines on the hour and half hour, every hour, for weeks.

President George Bush may not comment publicly on soldiers killed in action, but he certainly issued a statement decrying Daniel Pearl's murder.

Hell, the reporters will interview each other if that's who happens to be nearby.

A Google search yields 36,000 listings for Daniel Pearl. I didn't read them all (ahem!), and I'm sure that a portion had to do with his earlier stories or with different Daniel Pearls entirely, but a search for Daniel Smith only comes up with 35,000, and Minnie Pearl, arguably far better known, only gets 11,800.

But, after all, Pearl's a dead journalist.

Pearl, 38, was South Asia bureau chief for The Wall Street Journal. He was kidnapped Jan. 22, while researching a story about Pakistani extremists. A militant group calling itself The National Movement for the Restoration of Pakistani Sovereignty, using a free email account generously provided by Microsoft -- kidnapperguy@hotmail.com -- claimed Pearl was a spy and made a series of demands that went nowhere.

So, they did what cowards and bullies do. They murdered a defenseless noncombatant. After a videotape showed Pearl dead, confirmed by the State Department on Feb. 21, Sheikh Omar Saeed and three other suspects were quickly captured. Pearl's body has not been located.

It happens, I'd never heard of reporter Daniel Pearl. I'm sure he was a fine man, a good husband and father, a solid journalist, a terrific human being. However, bullies and terrorists have killed many fine people, and you don't see the media fawning over them, do you?

It's Important Because He's a Reporter, See? And We're Reporters, See?

We got every sighting, every rumor, every third-hand report, every scintilla of speculation about what had happened to the poor soul. Each network was, as usual, trying to out-do the others.

Why is it more news when a reporter is attacked or kidnapped or killed than when the same thing happens to anyone else? I guess they're sorta supposed to be non-combatants, like the Red Cross, or a priest, or something. And, of course, they're part of the fraternity.

Oh, the media go on crusades. Some of the seemingly interminable coverage actually deals with more prominent people than Daniel Pearl: Monica Lewinsky, Gary Condit, O.J. Simpson. Occasionally, the media cover actual news, like the Challenger disaster, or someone speaking out against the local school bond issue.

But let a reporter be involved and all logical news standards go out the window.

"Explosion in Pittsburgh. Now the latest on Daniel Pearl."

"Ice storm incapacitates the Midwest, and the latest update on Daniel Pearl."

Some reporters are celebrities in their own right, of course. We've grown tired and dismissive of Geraldo, who has become a caricature of a real reporter, because he's boring and has lost credibility. To some degree, that's true of Larry King, as well.

When the Reporter Becomes the News

But when Dan Rather screws up and proves one of the Right's pet theories by giving a speech at a Democratic fund-raiser, that's news, legitimately so.

When star CNN correspondent Peter Arnett's documentary on the U.S. military's secret use of nerve gas in Operation Tailwind during the Vietnam War proved to be mostly gas itself, the reporter was -- and should have been -- a news figure.

And the news hook on Daniel Pearl? Well, he was a journalist. That's all. A journalist pursuing a story that was interesting, had it proved fruitful, but journalists pursue lots of bad leads when chasing down a story.

We send reporters into harm's way. Reporters know the risks, but they generally don't think of themselves as ransom targets.

Was Pearl kidnapped because he was a Jew, as the killers have said? Perhaps. Probably. Or perhaps he was just in the wrong place at the wrong time.

Eason Jordan, CNN News Group's chief news executive, says, "This is a dangerous business. If people want to kill you or kidnap you, they will. You can't allow yourself to be intimidated by this kind of thuggery."

"When you go in, you've got to have a plan for getting out," agrees Larry Doyle, a CBS news producer. "We travel in convoys. We check in between cars by radio every few minutes. In Afghanistan, we have more bodyguards than journalists."

Few reporters in the war zone carry weapons, even though they may have large amounts of cash. Bodyguards, translators, drivers, food vendors, and hair stylists in Afghanistan don't take American Express.

"If you're armed, you're seen as a combatant by one side or the other," Doyle says. "You might as well paint a target on your back."

The next thing you know, the networks will start having cameras trail and film the reporters, just like the movie directors do, for the "making of the film" film.