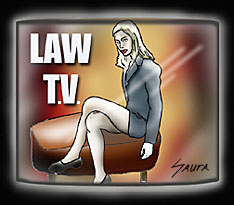 A legal system filled with handsome attorneys, fascinating stories, well-written drama, exciting action, intense emotions, with the right side winning in the end about 98 percent of the time. Sorta reminds you of real life, doesn't it?

Prime Time Is Full of It

Look at the prime time television series having to do with the law, lawyers, law firms, and Hollywood's take on justice: Law & Order (and two spin-offs, for goodness' sake!), The Practice, JAG, Judging Amy, Philly, Family Law, Ally McBeal, The Guardian, The Court, First Monday.

To that, you can add ubiquitous reruns of L.A. Law, Perry Mason, Matlock, Murder One, Night Court (is it really a law/justice show?), Rumpole of The Bailey, 394 cop and chase and crime-related shows, and an entire network devoted to Court TV.

And I won't even attempt to mention the dozens of terrific -- and a few not-so-terrific -- movies about the law, lawyers, spectacular cases, and courtroom dramas.

Lord! How do we have time for anything else? No wonder our society has become so damn litigious.

A Model Sister In Law

You may not think Judge Wapner and Rumpole are pretty, but a defining characteristic of three-quarters of the prime-time law shows is the sexy, beautiful, willowy models they've hired to serve as principal characters and eye candy. I readily admit that I enjoy watching Catherine Bell in a bikini, and, if ratings are any indication, I'm not the only one.

These folks look just like the lawyers we all know personally, don't they? The wonderfully attractive women and the athletic, good-looking guys. Here you'll find no back-office, bookish types -- well, maybe Jimmy Berluti is an exception -- who were awkward, unpopular kids, picked on by their high school classmates.

I don't recall seeing anything on her site about the plain Greta Van Susteren deciding to use the non-compete month between CNN and her new FOXyTV gig to have what some observers think is a massive makeover. Improve the looks, chase the bucks. For $900,000, I might, too.

Or Court TV's Emmy award-winning Catherine Crier, also a lawyer, who manages to get by very nicely with what nature gave her, thank you.

Heard the One About the Dead Lawyer?

And one attractive dead lawyer -- Gil Bellows' Billy Thomas who, as a ghost, a memory, a hot spot in the star's &hellip; er, &hellip; heart, keeps popping up on Ally McBeal -- was so popular that he has been resurrected as a different kind of spook in The Agency! Just like in real life, it's incredibly hard to get rid of a lawyer.

We complain about the way our profession is covered in the media, and we do this for a living.

Lawyers, it turns out, have a much bigger problem and a justifiable gripe. Although there are a handful of high-profile, high-visibility, highly-publicized practitioners who have figured out exactly how to use the media to their advantage, as a profession, lawyers need PR and MR help, big time.

A Google search reveals 75,600 hits on "lawyer jokes." How would you like to handle PR for a profession that has such a head start in the public consciousness?

You can do the same search yourself, but here are some sites to try: the Yahoo! list of lawyer joke sites, Duhaime.org's The Dumbest Things Ever Said In Court, LawyerHumor.com, Top Lawyer Jokes, and CarTalk's Lawyer Jokes.

Just because they need PR doesn't mean I want the sleezeballs for clients, you understand.

It is rare for actual trials to be as exciting as Paul Newman or Harrison Ford and a good director can make them appear. In the real world, few cases get that far; most are settled out of court, because they are not winnable or have little merit. (Of course, any asshole can sue; they may not win, but they certainly can entertain you for a few weeks or months.)

Or, as my friend Greg Luzecky points out, cases are settled because both sides have realistically evaluated the merits and -- with perhaps a little push from the judge -- have come to a reasonable settlement equally fair or unfair to both. I have an occasional running colloquy with Greg, an intelligent, thoughtful lawyer who runs a solo general and civil practice. He reminds me that an axiom of the profession is that usually you can run a more profitable, efficient practice elsewhere than the courthouse.

But, I admit, it is hard to popularize a lawyer spending hours in a library, or quietly working in his office, sifting through boxes of documents and data. Lawyering isn't always as exciting as Tom Cruise portrays it in The Firm.

"These shows need to have more contract lawyers. I feel under-represented," says Bill Quick of Polsinelli Shalton & Welte, with a twinkle in his eye. One of the honest lawyers I know -- you can find them if you hunt -- Quick points out that most legal work is done outside the courtroom: tax work, estates, ministerial duties, filing paperwork, ERISA and employment issues, analyzing, advising clients &hellip; advising, advising, advising ... sitting behind a desk, drafting contracts for hours and hours.

"Many attorneys go through entire careers without going before a judge," he says, "and that's a good thing."

We Ain't Doin' the News, Honey!

The courtroom cases on the drama shows, "Ripped from today's headlines," as Law & Order gleefully promotes, may make good drama and tickle the writers, but they're just a little out of real-world balance. Fat, bald, middle-aged attorneys aren't, TV executives believe, as appealing as good-looking models.

Hey! If you or I made business decisions that way, we'd be the case of the week on Ally. Sounds like there may be a lawsuit there.

Bring back John Cage and his nose whistle!

***
We'll finish this three-part commentary on the legal profession in two weeks, when I give you my take on the legal windfall lottery. In the meantime, I'll interrupt this little rant to talk about the annual terror the Infernal Revenue Service inflicts on otherwise law-abiding U.S. citizens.