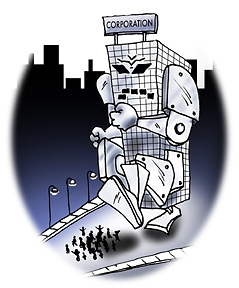 "It's not a promotional video for the corporation," writer and co-creator Joel Bakan told his audience at the IABC International Conference last night.

Yeah, Joel, you can say that again.

"The Corporation," winner of Sundance Film Festival's Audience Award, premiered in the U.S. just two days ago. The controversial film, previewed by a small audience the first evening of the IABC conference in Los Angeles, takes a one-sided look at the nature of the corporate institution and its impacts on our planet.

The anti-corporation and liberal activist crowds will love it; the unthinking will call it "brilliant." The film definitely will be widely seen and discussed.

I've managed to come up with a compliment, which I'll get out of the way early: "The Corporation" is well-made and, for a while, visually and narratively interesting.

A few short segments are top-notch. For instance, they include the classic climactic scene from one of the best animated shorts ever made, "Bambi Meets Godzilla." But it takes them two hours to get to it; by then, the urge for sleep has begun to overwhelm.

If there is a lead character in this talking-head-heavy, leftist-pandering propaganda piece, it is that master of fictional documentary, Michael Moore, who gets more than his share of face time, with his trademarked anti-corporate lurches.

Example: "Autos" -- Moore can't seem to get away from his hatred of Detroit -- "will end civilization as we know it," he says.

According to the now-wealthy Moore, corporations care nothing for the well-being of society, the environment, or any human being other than shareholders. Certainly the public good is of no consequence. Once the filmmakers have decided that corporate motivation is limited to the bottom line, "there is no such thing as enough."

The legal structure that fosters corporations gives rise to ridicule, rather than a reasoned explanation of why the law treats corporations as "persons." The corporation, if really a person, we are solemnly informed, is "a psychopath," the cause of cancer, up to no good anywhere, as the carefully chosen horrible examples illustrate.

And they dredge up some good ones. In one case, they tell us, eight people were "hanged for opposing Shell's environmental practices." Hmmm. I hadn't heard that.

One wonders if perhaps, just perhaps, there might have been a couple of details omitted from this story. Better be careful what you say the next time you pull up to the gas pump.

Of course, there are idiots in corporations, just as there among filmmakers and environmentalists and governments and social activists, and, in its shotgun -- or is that blunderbuss? -- approach, "The Corporation" manages to show us quite a few of them:

The film has quite an amusing example of FOX television execs confirmed as nitwits in dealing with reporters who had put together a well-researched, but negative, Monsanto story. Seems the TV guys didn't want to lose the chemical company's ad revenue, so they made the reporters revise the story 83 times. Yes, 83 times. After all that, the honchos still couldn't get the reporters to quit, so they fired them.

In Bolivia in 2000, the government privatized all water, according to the film. If you didn't buy your water from Bechtel, you couldn't have any; it actually was against the law to collect rainwater, they say.

Well, if you look into the matter, you'll find… It wasn't actually the whole country of Bolivia, only the town of Cochabamba. And the foreign investors were a consortium, not just Bechtel, who points out that they own only 27.5 percent of the business. And reports that the contract required citizens to get permits to collect rainwater probably simply came from a peasant saying that people had to "lease the rain." And, oh yes, many of the citizens benefited from the new arrangement.

But let's not worry too much about facts when dastardly big corporations are in an activist's sights. Still, if you happen to believe there might be another side to this story, you can look at Bechtel's perspective.

Others have said the film plays fast and loose with the truth. I suspect that it is at least half true, but it's up to a researcher or a discerning viewer to decide which half is which. Anyone dumb enough to believe everything they see in "The Corporation" needs to be really careful around sharp objects.

There are idiots aplenty. The filmmakers might be disheartened if they were to realize the irony of them often looking as stupid and venal as the people and corporations they are pillorying.

As far as the film is concerned, nothing a corporation can do has value. They show a lunatic segment of Pfizer performing good works in a downtrodden neighborhood, then they whine that the money spent should instead have gone to the taxpayers.

Can I say 'Happy Birthday'?

Like teenagers ripping off music on the Internet, "The Corporation's" writers complain that the song "Happy Birthday" is copyrighted, which means someone owns it.

So? I'm writing this commentary, and I damn well assure you, I own it!

They include a section on marketing to kids -- presumably, they're against the practice -- that sounds almost complimentary to marketers. Obviously, that's not what they intended.

And they take on experiential marketing, which their spokesperson calls "undercover marketing." Now, frankly, I think a lot of these experiential tactics are pretty labor-intensive and cost-inefficient for the dollars they generate, but so far, I'm not seeing the tactic leading to the downfall of society.

It worked for the Communists

The filmmakers -- and the scary-looking Moore -- would be happiest if all corporations were to disappear and everything was turned back over to "the people." That would, of course, be their kind of people, not just people in general.

They don't seem to have much concern over what would happen to the millions of workers whose jobs would disappear along with those dreaded corporations. Perhaps those folks could all go back to tilling the land, or planting vegetables, or fishing, or something.

They run quite a bit of an interview with a corporate carpet-maker who got religion, and is doing everything he can to take "the corporation" out of his corporation.

Though the filmmakers long for some form of democracy that apparently is different in unspecified ways from what we have today, I doubt that they would find the outcome satisfactory were they to put their fanatical changes and all the likely consequences to a vote -- and saw real democracy in action.

Actually, it's difficult for me to become too exercised over this 2 1/2 hour piece of tedious propaganda.

A lot of work went into it. It's just a shame it couldn't have been expended on something more productive.