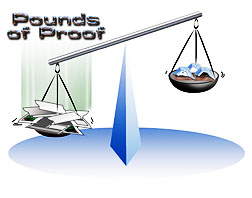 A hundred years ago, when I started in PR, I worked for a PR Director whose client evaluations were mostly measured in "pounds of proof" -- the piles of clips we could accumulate.

We joked about it, but the idea of setting measurable objectives for a media relations program had never occurred to him or to our clients. Or to me. The purpose of media relations was, well, to get clips. Press. Mentions. Column inches. Your name in the paper.

He didn't like the method all that well, but at least we were providing something that was measurable, even if it wasn't valuable. He didn't know what else to use.

More recently, when my partner very briefly took a position with a local agency, her new boss demanded that Brenda become an inventor, fabricating inflated results from the agency's work.

Client revenues and the supervisor "looking good" to her agency and the client were more important than honesty, ethics, and the bit of gray matter that needed to be engaged to actually design a more effective PR program and admit a mistake.

Seems the boss had stupidly over-promised to a client. Unthinkingly pulled a number out of her ass: "We have about $2 million of ROI."

No, they didn't. But she tried to justify it, to bull her way through. She told Brenda to re-work the numbers to support the lie: "Make it be there."

To her everlasting credit, with no fall-back job in hand, Brenda resigned.

Neither of those is measurement, although I would go with an honest, though worthless, counting of clips long before I could countenance blatantly lying about results. But we shouldn't have to accept either.

Although the "pounds of proof" approach should have long since been dead and buried, surprisingly -- and sadly -- it hasn't disappeared.

The industry flirted with -- and some practitioners married -- "ad value equivalency," which seemed to appease bean-counting executives. We moved to something called "share of discussion." But it was only when practitioners started looking at PR impact, not PR outputs, that measurement was seen in a new light.

The Paine of Measurement

For years, Katie has lobbied for improved requirements for measurement of award entries. She and Dr. Walter Lindenmann of Ketchum PR published a killer set of "Guidelines and Standards for Measuring and Evaluating PR Effectiveness" on the Institute for Public Relations Web site. When she's asked to judge, she automatically throws out any entry that doesn't tie results to stated objectives.

The Measurement Standard has a column this month on measuring Web sites, and Measures of Success offers a couple of outstanding (I've already used "excellent," right?) White Papers on measuring results in a crisis and measuring your image in cyberspace. Both are pretty fine additions to your library.

(She also names CornerBarPR.com in her "Best of the Web" column. Quite a nice honor, Katie. Thank you.)

I've been preaching "measurable objectives, followed by measurement" for two decades. Is anyone listening?

We're Done. Let's See if I Caught Anything.

Knowledgeable professionals like Katie certainly are listening; they knew it first. It really isn't that hard, if you begin in the right place. And that's not, "Now the project is done. Let's check the results."

No, measurement and evaluation begins when you plan the project, not when you're about to wash your hands of it.

Most people "do" objectives wrong, yet properly designed objectives are the key, both to successful projects and to effective evaluation.

It is less than useless to have as an objective to get your name in the paper. Think of Kenneth Lay, Bernie Ebbers, Scott Sullivan, David Myers, John&Timothy&Michael Rigas, James Brown, Michael Mulcahey, Samuel Waksal, Dennis Kozlowski, M.C. Mathews, Anthony Chrysikos, Ivan Boesky, Michael Milken, and Charles Keating. Rep. James Traficant Jr. doesn't count; he was getting his name in the paper anyway.

If you don't know some of these people -- or most of them -- it doesn't matter. All have managed to get their names in the paper numerous times. From those you do know, you can figure out the general reasons we've been reading about the others.

No, getting mentioned in the paper is not a good goal.

As far as this Curmudgeon is concerned, the only valid objectives are those that aim to change attitudes, actions, beliefs, behaviors, and opinions in ways that are beneficial to your company or client.

Every one of these can be stated in quantifiable terms; if so stated, the results can be measured.

What that means is, "publish a monthly newsletter" or "hold a news conference" are not objectives.

They are tactics. Tactics to achieve something else.

What is the purpose of that newsletter? What corporate objectives does it support? Why are you holding a news conference? What result do you hope to achieve?

I Can Get You on the News

No, it's NOT to get your company 60 seconds on the evening news. I can get you more than that, on more newscasts in more cities, by blowing up a plant, polluting a river, or showcasing an executive who's embezzling from the pension fund.

Do you see how stupid it really is to invoke a tactic and call it an objective?

But if you have the self-confidence to create something that is measurable and that supports your organization's objectives, or your client's, then you're on to something. If you actually are trying to change attitudes, actions, beliefs, behaviors, and opinions, you know what? You can measure the results.

You can look at the starting point, which is measurable, too; you can track -- measure -- your program's progress along the way; and, voila!, you can see if you've accomplished anything and if so, what, and if not why not.

Now this requires a little guts, of course. You have to be willing to stick your neck out and have your work evaluated.

If you're good at what you do, what's wrong with that?

And if you're not, then get better or get lost. You're dragging your company and your colleagues down, and both would be better off without you, unless the "you" improves.

If your objective is a pile of clips, go jump off a building.

Call me first and pay in advance; I'll make sure there's a camera present.