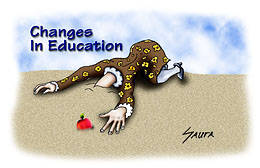 It's the start of school, and the teachers just don't get it.

Their professional associations certainly don't get it.

Boards of Education don't get it.

The education hierarchy doesn't get it.

But there are a couple of groups that do get it, and they're moving on, leaving the traditional education establishment in their baffles.

If you were dropped here from another planet, and you began to look around, you'd notice something that is eluding the blindered, self-interested teachers-associations-Boards-establishment that support education's status quo.

Getting Away As Fast As They Can

You'd notice the groundswell -- in some places, it's more like a stampede -- of ordinary citizens, professors, intellectuals, and a passel of others racing away from education as it currently is practiced in the United States.

Because the traditional red brick schoolhouse isn't doing the job, that's why.

And although the education establishment is beginning to experiment with some of these new labels and alternate forms of education, they are, in many instances, doing so half-heartedly, with the primary goal being to snag some of the state and federal funds showered upon the country to get schools to try something -- anything -- to improve student performance.

Living on the Edge

If everything were hunky-dory, it's a pretty safe bet that the experimentation would be on the periphery of discussions about education, not at their center.

If it ain't broke, don't fix it, and where there's smoke, there's fire.

I'm sure I could come up with a double handful of other old homilies, but those two seem to capture the current state of affairs pretty well.

Isn't anything about education being done well? The teachers don't give us much of a chance to find out.

Look at it this way: Public schools are supported by taxpayer dollars. In most jurisdictions, taxpayer financial support is determined at the ballot box, directly or indirectly.

What might cause taxpayers to vote in favor of increasing the levy on themselves to provide revenue for public education? Well, there are, of course, dependable voters who just blindly support education. And a few others really believe in what's going on in their local schools, or they have relatives or friends who work there, or they have some other, narrow agenda of support for the local school system.

However, the swing votes are cast by those with no connection to the schools. People who need to be convinced that their dollars will be well-spent. People who have no more reason to believe teachers who say "trust us" than they would to believe a politician who gave the same two-word speech.

How can these folks possibly learn enough about the schools to be supportive of them? Even if the schools were good, how would these unconnected citizens know it?

School administrators eventually figure out that you can either ignore the unconnected patrons and hope they'll be outvoted or at least busy or uninterested on election day, or you can show them all the wonderful things that are going on in the schools and earn their understanding and support.

In some school districts, of course, sheer numbers mean that the bullying philosophy of "we have the votes, so the rest of the public be damned" can win in the short run. But surely I don't have to point out what an incredibly stupid, shortsighted philosophy that actually is.

In most of the country, the key to passing bond and levy issues and assessments and generally encouraging support of the school system is to keep people informed.

It seems so obvious.

Beyond the fact that it's the smart thing to do, to win the hearts and minds before you need the votes, it also happens to be ethical. School districts are spending taxpayer dollars, and they have an obligation to inform taxpayers of the results of those expenditures.

But time and again, greedy teachers' unions and shortsighted Boards of Education and stupid administrators and uninformed parents look at the few thousand dollars being spent on communications and public relations and unthinkingly opt for the short-term hit, rather than long-term survival. If it's negotiating time, the teachers would rather have that $120,000 communications budget spread among their 450 colleagues than for it to seed positive public opinion.

They demand that the district put that money into the classroom, into teacher's salaries, rather than fostering and nurturing positive community attitudes that likely would mean hundreds of thousands or even millions of additional dollars to the school district in the long run.

So, if something good happens to be going on in the schools, how does the word get out? Who is left to tell about it? The already-overworked principals? Oh, come on! The high school yearbook sponsor or journalism teacher? I guess they don't have enough to do already, right? Anyway, it's a different skill set.

Parents? Sure. Then all you'd see is the seemingly same class of second graders in many different poses that are cute as hell to their parents and of absolutely no interest whatsoever to the local media. Not another damned balloon launch or celebrity book-reading, please! You might get an occasional sporting event, but when would you ever see an article about an artistic -- or an autistic -- high school junior with wonderful promise? Or a teacher who had just achieved something extraordinary?

And who would be counseling building administrators on crisis communications and dealing with hostile media? Who's there to help the day the school bus runs over the kindergartner and the gang violence breaks out at the high school and 14 kids come down with a mysterious ailment after eating in the East Junior High cafeteria?

Yeah, it sounds like a good idea, to take those dollars and give an extra couple of hundred to each teacher.

That'll go a long way toward reducing the complaints about the state of education and the cry for alternatives.