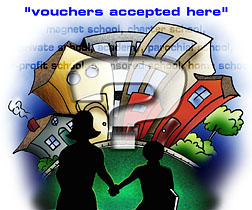 I recently came across an op-ed headline, "Vouchers are a bad idea."

The headline refers to school tuition vouchers, the most controversial form of school choice, which permit use of public funds to allow students to attend private schools.

On June 27, in a 5-4 decision, the U.S. Supreme Court upheld the constitutionality of school vouchers in a Cleveland, Ohio, case. The ruling establishes that school tuition vouchers are legal, but not whether they are worthwhile.

Vouchers may be a bad idea, as the op-ed postulated, but that doesn't necessarily mean that education as it currently is being practiced in this country is a good idea.

Sponsors are paying for charter school buildings with the incentive that their employees' children get admittance preference. Is this allowing private parties to buy "rights" to attend public schools? Hmmm.

Programs for gifted and talented students have mushroomed, because the needs of these high-ability or high-creativity students are not adequately met in most standard classrooms.

For-profit schools have spring up. A dozen or more school-management companies are trying to improve education and their corporate treasuries at the same time. The Edison Project probably is the best-known, managing 136 schools serving 75,000 students in 22 states and the District of Columbia.

As with most forms of education alternatives, there is controversy. States are pulling back support, as they say the for-profit schools aren't living up to their promises. Hide-bound, self-serving traditionalists, who want no part of change, are adding their voices to the din.

The Challenge: How Fast Can You Get Your Head Down?

But the option of expanding school choice, what could possibly be wrong with that? You'd better duck if you ask that question.

Well, someone better start thinking about education, because, in many places, what we're doing isn't working. Even though the NEA and the AFT and the politicians in their pockets are satisfied with the status quo, many parents, businesspeople, and ordinary non-parent citizens -- and the majority of academicians and researchers -- are not.

Right now, people throughout our country are fed up with the quality of American education. They pay taxes into the public treasuries, while simultaneously paying tuition and transportation costs and suffering inconvenience to put their children in what they believe to be a more positive educational setting.

If so many people across our country believe that we need an alternative, maybe we should take a page from a basic economics textbook and recognize that these people are casting votes, as surely as if the were pulling a lever or putting ballots into a metal box.

In poll after poll, Americans rank education as one of their top concerns.

And why not? In 1999, international comparisons showed U.S. seniors' mathematics skills a measly 15th out of 20 developed countries, and only 12th in science. BusinessWeek online says it is "[n]o surprise that many parents are ready to try almost anything not run by the local school bureaucracy."

The answer of unthinking teachers is "More money! More money! Give me more money, and I'll continue doing the same things, but I'll be able to take better vacations."

[My wife, the university professor of education, was a superb, hard-working public school teacher. She is offended by my commentary and passionately disagrees. I'll see if I can get her to write a rejoinder, but don&rsquo;t hold your breath.]

More money certainly didn't help the Kansas City, Missouri, School District, as an incredibly ill-conceived desegregation plan poured more than $2 billion of taxpayer dollars into the district -- that's $2 billion, with a "B" -- over a 12-year period, with few positive outcomes except for the local construction industry and one fervent and now very wealthy local lawyer.

Defending Against an Incompetent Approach

The conservative Cato Institute offers a terrific analysis and description of this failed experiment in solving education's problems by raining huge amounts of money from the pockets and bank accounts of defenseless citizens down on an eager but incompetent school system:

For decades critics of the public schools have been saying, "You can't solve educational problems by throwing money at them." The education establishment and its supporters have replied, "No one's ever tried." In Kansas City they did try. To improve the education of black students and encourage desegregation, a federal judge invited the Kansas City, Missouri, School District to come up with a cost-is-no-object educational plan and ordered local and state taxpayers to find the money to pay for it.

Kansas City spent as much as $11,700 per pupil--more money per pupil, on a cost of living adjusted basis, than any other of the 280 largest districts in the country. The money bought higher teachers' salaries, 15 new schools, and such amenities as an Olympic-sized swimming pool with an underwater viewing room, television and animation studios, a robotics lab, a 25-acre wildlife sanctuary, a zoo, a model United Nations with simultaneous translation capability, and field trips to Mexico and Senegal. The student-teacher ratio was 12 or 13 to 1, the lowest of any major school district in the country.

The results were dismal. Test scores did not rise; the black-white gap did not diminish; and there was less, not greater, integration.

The Kansas City experiment suggests that, indeed, educational problems can't be solved by throwing money at them, that the structural problems of our current educational system are far more important than a lack of material resources, and that the focus on desegregation diverted attention from the real problem, low achievement.

... from "Money and School Performance," a policy analysis from the Cato Institute. Used with permission.

And educators wonder why parents and non-parent taxpayers are mad.

Maybe we can get the school communicator involved. No, that won't work, because the teachers have demanded that school district PR funds go into their pockets instead, seemingly unconcerned with the public communication responsibilities of taxpayer-supported "public" education.

In the current environment, these public school apologists better wake up. I'll talk more about that in a couple of weeks.