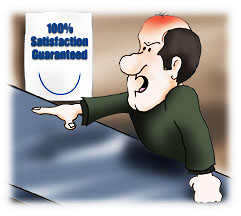 When did the "service" component stop being a part of customer service?

It's been happening in bits and pieces.

Service stations stopped offering service of any kind. Now we have gas stations and repair facilities, but I challenge you to find them under the same roof. What you'll find is a Mini-Mart in what used to be the garage bays.

Repair technicians began scheduling a four-hour arrival window: "I'll be there between 8 and noon." At least cable companies narrow it to two hours and give you $25 if they show up late. And Pizza Hut, bless their hearts, will give you a discount if their pizza delivery is as little as 15 minutes late.

Doctor's offices triple-book; performers and hotels double-book; airlines and golf courses overbook; restaurants won't book for fewer than eight. While you're waiting, you can read a whole book.

People whine, but it seems to make little difference. Companies are looking for what's easiest for them, not what will actually serve their powerless and ill-considered customers.

It wasn't all that long ago when banks began to charge for services that previously had been free. First, they started requiring minimum balances. Maybe they think customers aren't smart enough to realize that we're providing interest-free loans on which they can make -- and keep -- a profit.

Then you had to pay to get your canceled checks back. After that, you had to exchange or deposit coins on certain days; then they started charging to even accept change.

Hell, now some of them charge you just to answer a simple customer service question, or to use a teller, or to use their ATM. And a few are charging fees if you use their on-line bill-paying service.

What the hell is a bank for, anyway?

Remember Jack Nicholson's famous cafe scene in "Five Easy Pieces"? His character, Bobby Dupea, had a seemingly routine order: "I'll have an omelet, no potatoes. Give me tomatoes instead, and wheat toast instead of rolls."

Something so simple I could do it in my own kitchen, but he ordered it from Lorna Thayer, a waitress who was not having a good day, but who was all too pleased with her diner's policy of "No Substitutions."

After Bobby makes several reasonable but failed attempts to get the food he wants, the scene plays out this way:

Bobby: "I'd like an omelet, plain, and a chicken salad sandwich on wheat toast, no mayonnaise, no butter, no lettuce. And a cup of coffee."

Waitress, sarcastically: "A number two, chicken salad sand. Hold the butter, the lettuce, the mayonnaise, and a cup of coffee. Anything else?"

Bobby: "Yeah, now all you have to do is hold the chicken, bring me the toast, give me a check for the chicken salad sandwich, and you haven't broken any rules."

Waitress: "You want me to hold the chicken, huh?"

Bobby: "I want you to hold it between your knees."

---
Too often, we know exactly how Bobby felt. Indeed, we run into that in restaurants all the time. What are these people thinking?

Is business so good that the owners not only don't care whether we return, but they also are perfectly happy with us telling all our friends that management believes making life easy for their kitchen help is more important than satisfying their customers? Is that really the message they want their former customers giving to potential customers?

I had a service technician I used to use all the time. (I won't mention George by name.) He was likeable, more than competent, and gave high-quality service at low cost. His cost remained low, but, even though I always paid him on the spot, and often gave him a little extra as a way of thanking him for his good service and low prices, his promptness deteriorated. It became harder and harder to reach him by phone. I no longer use him.

The funny thing is, I'd have been willing to pay him much higher fees just to maintain quality service from someone I liked and had developed a relationship with.

David Nguyen at Payless Computers acts as if I'm his favorite customer when I come in the door; he does all sorts of little and not-so-little things to accommodate me. I buy stuff from him that I don't need, because he treats me so well.

Richard Eberhardt and his crew of technicians -- Mike, Steve, Jeff, and Say -- at the Radio Shack Service Center are exactly the same. Debbie and Richard recognize my voice on the phone, they all give me special treatment, and I go back again and again.

All my computer stuff is under contract with them, even though they are located many miles away in an inconvenient part of town that has traffic from hell. Why? Because they've figured out that the customer is important, and they act like it. They also give excellent service.

Brenda and I have both complimented Randy Leiker of Skyway Networks many times. Randy, CornerBarPR.comSM Tech God, charges low-end prices and, despite being a small, overburdened business, he gives high-end quality. He's well-positioned as a guru: smart as a whip, and many, many times has kept us out of trouble.

Then there are the arrogant suppliers.

You know the saying, "The customer is always right?" Well, we have one supplier who has an interesting philosophy: He's right. And he listens to the customer minimally, except to argue.

We started doing business with him because of a relationship. He was a friend. He also was -- and is -- good at what he does. But now, like a lawyer, he charges for every time he answers the phone; if he makes a mistake, he charges for the time it takes to fix it.

Makes me wonder, can the Peter Principle apply here? Do you rise to the level of sufficient business that you stop caring about your clients? You no longer care about maintaining relationships?

If so, you'd better be damn good; otherwise, some day you'll find yourself with NO clients.

Reminds me of that wonderful line in "The Hunt for Red October," when Exec Officer Amalric tells Konovalov Capt. Tupolev, "You arrogant ass. You've killed US!"

Brenda does it. I do it. Pizza Hut does it. David does it. Randy does it. And so do Richard, Mike, Steve, Jeff, Say, and Debbie.

But when we find a better alternative, what do you really think is going to be the fate of the expensive, uncooperative, relationship-oblivious, arrogant asshole supplier who used to be our friend?