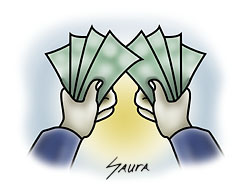 The headline's well-known quote, spoken by Dick the Butcher, is, the lawyers would tell me, taken out of context from a scene in Shakespeare's "Henry VI, Part 2."

You know what ticks me off? The lawyers.

I'm ticked off by all the "helpful" lawyers, who try to shame you or scare you into taking their advice and spending money with them.

It's Only Money -- MY Money

The ones who tell you all the horrible things that have happened, or that could possibly happen -- indeed, that, in their opinion, likely will happen -- if you don't authorize them to go ahead and spend that next $2000 or $10,000 or $50,000.

The ones who get all sad-eyed at how clueless you must be when you tell them that it costs too much, that you don't perceive the risk as all that great.

What you want to say, of course, is, "Back off, you greedy sonofabitch." But you don't, because they have the upper hand. They have a body of knowledge you only vaguely understand, and they are quite capable of expressing themselves about it using a glossary full of threatening-sounding jargon.

It's a temptation to give in, because most of them have good ideas and the experience to know the problems that can develop and the trouble you can get into if you don't take their advice. And buy their services.

Maybe You'll Only End Up Dead

But lawyers are not like the insurance agent, where the worst thing that can happen is you're dead, and somebody else has to worry about the consequences. Or the doctor, where you may -- or may not -- someday develop some malady that may -- or may not -- affect your lifestyle.

If you don't follow the lawyers' advice, you could end up broke, divorced, out of business, in jail, abandoned by your friends and vilified by your colleagues, with your picture plastered across page one in unflattering ways. And they'll make damn sure you understand this.

They're often excellent, well-read communicators who are skilled at eliciting a tremble from a simple story. Followed by your sweaty palm urgently grasping the pen to sign their engagement letter, like you've been hip-no-tized, as Dave Letterman likes to say.

The problem is, we're envious.

Communicators and PR practitioners and MR types aren't anywhere near this successful at convincing others. We don't charge for all our time; we don't have the resources to enforce collection; we don't have a provable body of work, with scary, defined outcomes of a negative event. Our advice isn't respected.

Of course, we could do better. It is not that hard to come up with horror stories. Some bosses and clients need to hear them before they'll buy into an otherwise obvious idea, and a few practitioners have figured out the motivational power of a carefully selected video dropped into their client presentation at a key moment.

One of the masters of this is Merrie Spaeth. Sign up for her Bimbo Awards e-newsletter; if she's ever presenting in your part of the country, drop what you're doing and go. You'll see the videos you could be using to make your points.

But the lawyers, they have this down to an art form.

They also have a monopoly.

Need to fix a traffic ticket? "No problem. Have your lawyer call."

"But I want to do it myself, to deal with you directly."

"No, the only way we can handle that is with your lawyer."

Ah, yes. The ticket-fixing racket. A subsidy by the city that makes a pretty nice living for traffic lawyers, who handle these things 30 at a time in quick meetings with the prosecutor.

It's not just traffic tickets. This goes on, in myriad ways, throughout this great land. Lawyers supporting lawyers.

Lawyers on opposite sides seem to have a conspiracy; they are united by the very issues that separate their clients.

Lawyers Have a Common Goal &hellip; And It's Not Solving the Problem

When they're patting each other on the back, cooperating, demonstrating extreme professional courtesy -- a "collegial bar," they call it, and it's not the kind of bar we like to talk about around here -- in trying to support and work with one another, they're often marching toward the common goal of maximizing billing to their clients.

When they're fighting like tigers, arguing, plastering the parties with paper, demanding, delaying, being obdurate and inflexible and unresponsive and uncooperative and intransigent, and making things as ugly as possible -- acting for all the world like "a raging dickhead," as one of my lawyer friends put it (yes, I admit it; I have lawyer friends) -- they're often marching toward the common goal of maximizing billing to their clients.

When they're sympathetic and concerned, but raise the specter of ethical issues -- "I'm conflicted out" -- and you get referred to a colleague at another firm who probably will bill at a higher rate and who, by the way, will make exactly the same type of conflict-aided referrals in return, they're often marching toward the common goal of maximizing billing to their clients.

It Must Be Genetic

There's no wink, wink, nudge, nudge here. Hell, they're so good at this common goal crap that it must be genetic.

Like when lawyers could move early in a case for dismissal &hellip; and then there's tacit maneuvering on both sides to delay the motion. Nothing overt, you understand, no provable conspiracy. But the thought crosses your mind: Why is this taking so long?

Or when you go to see a lawyer about a single problem and are referred to lawyers from every other practice in the firm, because, after all, your problem is complicated and could go into other dangerous areas and requires additional, specialized expertise. Before you know it, you've hired a team &hellip; and multiplied your fees tenfold!

Or lawyers that play the contingency fee or class action lotteries, with the hope and expectation of a windfall that would make Croesus envious. [More on that in next week's commentary.]

Now I actually have nothing against lawyers making a profit. That's what I want in my business, too. And anyway, I'd rather work with a successful lawyer than an unsuccessful one -- if I have to work with one at all.

But they don&rsquo;t need to kill a bear, at least not with every client. Do you want to work with someone who, when you come in the door, sees his kid's entire college education wrapped up in your problem and checkbook? Or would you prefer someone who wants the bear to live, so he can also sell services to its cubs and to the other bears it'll bring along in the future?

It's amazing what can happen if two parties in conflict are able to set ego and attitude and history aside and try to sit down together and negotiate away some of the issues that separate them.

It's possible, of course, that the lawyers might eventually get to the same point, but what do you think the odds of that are? And how many hours of billable time would you have accrued, just for the pleasure of having an attorney or two at your side?

Now not all lawyers actually like other lawyers or law firms. But many are greedy. Go to the Greedy Associates&trade; link of the FindLaw Career Center, find your favorite topic or area of the country, and keep your head low. Trust me, you'll find some entertaining conversation about salaries; the good, bad, and ugly of law firms; who's in and who's out; and lawyers maximizing profits.

Our Guy Is Better Than Your Guy

Of course, for some lawyers, good advice and actually helping the client wins out over generating billings. CornerBarPR's excellent intellectual property expert, Blaine Kimrey of Lathrop & Gage L.C., is a terrific example. If he's not "conflicted out," you should hire him.

But then there's the other type, the lawyer I contacted for anecdotes for this commentary. The end of our conversation?

"Do I bill your personal account or the business?"

Ah, lawyers. Tune in next week for more happy thoughts.