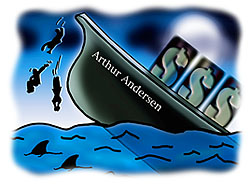 Let me start by saying something positive about the company popularly known as Arthur Andersen.

Of course, it's easy to pile on, and I intend to do that in a moment.

I don't know anyone on Andersen's communications staff, but, even though the company has been caught with its tit in the wringer, they've tried to do some appropriate communications stuff that may very well have been a tough sell to management.

Big as life on their home page is a large, easy-to-find section, "Our Perspective." It says "Read our statements and news releases on the facts surrounding the Enron investigation."

The only way it could be more forthcoming would be for it to say "Read how our company screwed up with Enron."

The facts page is loaded with links to statements, letters, releases, facts and figures, and contact information. It also happens to be a pretty nicely designed page.

On the Contact Us page, they guarantee responses to members of the media and analysts.

If only the auditors and consultants and executives and others who prostituted themselves with Enron could have been as professionally oriented as Anderson's communicators.

We all know about Andersen, of course.

Auditors and consultants for Enron, the firm has been castigated both for the incestuous relationship -- Oh, come on; it's standard industry practice. They just happen to be the ones caught this time. -- and for abrogating their independence and fiduciary responsibility, plunging their reputation and credibility down the toilet with a single flush.

If you're a corporate executive, do you think these deals are limited to Andersen? Does the credibility of an entire industry take a hit? Who do YOU choose for an auditor?

Andersen had audited the books of the high-flying, low-dealing energy trading company and now faces more than a couple of lawsuits from angry investors.

Merck & Co., Andersen's largest client, dumped them after a relationship that lasted more than 30 years. Various media reports point to the sky falling: losses of some 33 accounting clients at the same time they gained only five.

And, adding insult to injury, Anderson gets to pay some $217 million to investors in the Baptist Foundation of Arizona, an investment fund that bit the dust after running up huge investment losses that Andersen, its crack auditors, didn't bother to disclose, plus another $640,000 in self-flagellation pocket change to the Arizona State Board of Accountancy.

The other Big 5 -- soon to be Big 4? -- accounting firms, smelling blood in the water, have distanced themselves from Andersen. They can proudly point to their luck in not being the ones caught and wail about the besmirchment that has befallen the whole, honorable accounting profession. The American Institute of Certified Public Accountants, a professional association representing 330,000 CPAs, has severed its ties with the firm.

I'll Bet We Could Get Andersen to Work for Us Cheap

&ldquo;I don't envy a board chairman who has to stand up at an annual meeting and say 'We have decided to retain Arthur Andersen,'&rdquo; said Peter Knutson, of the University of Pennsylvania's Wharton School of Business.

Writer John Gaffney, in an article on Business 2.0, says, "If I had anything to do with advertising at any one of these companies, I'd put a rush order on new creative that positions my firm as an 'island of honesty and integrity in a sea of instability.'"

They "often work as a marketing and PR unit, backing the same policies and defending each others' practices."

A School of Sharks

Now that's the devil and the deep blue: Do you support your country club cartel, or do you start ripping out flesh?

Part of the answer, of course, depends on how much exposure you think your firm has to the same kind of ethic-twisting double-dipping that is haunting Andersen. If you're clean, what's the harm in a little sport shooting? And, if you're not, you'd better invite your buddies from the other firms in for an evening of poker and scotch. Lots of scotch.

Make sure the lawyers, the regulators, and any ethical communicators on your staffs don't find out.