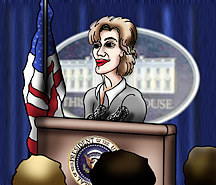 Off camera: "Like having the right answers is yours."

And so it begins.

The Best Show on Television

"The West Wing": the best show on television. Okay, some of you like "The Sopranos," but it doesn't have anything to do with media relations.

In case you've been living on Mars, "The West Wing," according to NBC hyperbole, is "a realistic, behind-the-scenes peek into the Oval Office as seen through the eyes of its eclectic group of frenzied staffers and the devoted First Family."

On 31 Mar 04, in a television show about a television show, an invented program called "Access" went behind the podium for a documentary day in the life of fictional White House Press Secretary C.J. Cregg, played by Allison Janney.

C.J. laughs. "This is a terrible idea. I don't know what I was thinking &hellip; I can't let this project in any way compromise my obligations to the President of the United States. [pause; very slight smile]

"After President Bartlet," C.J. says, "my face is the one most associated with this administration.&hellip; The public is used to seeing me at the podium, confronting an adversarial press, and there's a misconception that I'm here to stymie reporters or to mislead the public, to spin or even hide the truth, when, in fact, any good Press Secretary aims to do just the opposite."

We all know to repeat key statements, to be sure the reporter or audience "gets it." The documentary -- er, "The West Wing's" writers &hellip; well, somebody -- repeats the full "misconception" statement three times during the hour.

A practitioner would identify with C.J. and might learn something about the art of being a good Press Secretary at the same time:

"The breakneck pace we live at, the 24-hour news cycle: Is this good for the country? Is it inescapable? How do we reflect, get perspective?" 2x

"I see my job as making sure the press, and, through them, the public, is well-informed. I tell 'em the truth. [long pause] That's my goal." 2x

"I'm here to articulate the President's message and to honestly inform the press and, through them, the public, about what is happening on any given day." 3x

"It's like being on a debate team. You don't argue for the other side. There's an inherent aspect of spin that's just human nature. You try to strengthen and clarify your point of view. If you choose not to advertise your vulnerabilities, is that a cover-up?"

"I'd like to think that Jim Haggerty, who was Eisenhower's Press Secretary, kind of knew what they were getting into when they started allowing press conferences to be recorded and edited for the first time -- giving up control of your message, putting that in the hands of news producers. For those 33 minutes Haggerty stood in the wings of the Indian Treaty Room, I can only imagine what he was feeling."

Since then, the media's importance has mushroomed.

"The Press Office feeds a media machine with a 24-hour appetite," a voice-over says, throwing in a bit of audience education:

C.J.'s day goes from the sublime to the ridiculous, but with smart dialog:

Someone is about to report that the First Lady accepted an expensive dress -- "a burgundy Richard Tyler gown, satin, off-the-shoulder" -- as a gift from the designer.

"The ethics rules are pretty clear," an assistant says.

C.J.: "Looks like I'll be rifling through the First Lady's closet this afternoon."

"And you could get fired for it."

Turns out -- thank goodness for a staff of writers to solve this type of puzzle -- the gown was donated to the Costume Institute at the Metropolitan Museum of Art.

"You can't afford to ignore what even seems trivial," C.J. says. "Remember the [story about] Bartlet the Dog-Hater? &hellip; That was entirely my fault. I made light of some question about why the Bartlets had never owned a dog, and there were stories for weeks."

But the Press Secretary's job isn't all about gown malfunctions and dog-hating.

President Bartlet is about to make scripted remarks on AIDS in Africa during a Ugandan State Visit. C.J. briefs her staff: "The President is not taking questions at that; it's just a prepared statement."

Staffer: "They know that."

But, of course, he IS the President, and when Bartlet "wings it" at the lectern, C.J. watches him on C-SPAN, in a state of mild panic: "Oh, boy. Oh. Yeah. Yeah, yeah, yeah. [pause] He never says it exactly the way I would, but that's the fun part."

Um, You Coulda Told Me

On cue, an unexpected, potentially staggering news event develops -- this is a drama, after all -- and C.J. is kept out of the loop. As she is waiting to be briefed by the President and the Director of the FBI, she visits with the documentary crew, who aren't sure whether they will be allowed to film the briefing:

Off camera: "So, a typical morning so far?"

Off camera: "Because we're here?"

C.J. "I don't have to tell you about the Heisenberg Principle."

Off camera: "The act of observing a phenomenon changes it."

Josh Lyman, Deputy Chief of Staff: "There have been times where, for her own sake, in order for her to do her job and for her to remain an honest source for reporters &hellip; If she were to have information, she would be ethically bound to share it, and I don't want to put her in that position."

C.J.: "Why do you think I'm not going to be asked questions about this?"

Toby Ziegler, Communications Director and C.J.'s boss: "The truth, I know, is an elusive idea, but there is a time and a place for when certain facts can be dispensed to the press and to the public."

C.J.: "If I had been truly briefed, instead of a PR gesture, I could have told you this morning this thing wasn't going away."

A "former White House Press Secretary" is interviewed, saying, "There's a loneliness in this job -- a certain front-line mentality -- that your colleagues in the rear echelon never completely understand."

You Can't Lie if You Don't Know the Truth

C.J. later says, "Do I ever have to lie to the press? Sometimes -- lots of times -- I withhold information for valid reasons, but you can't lie. You run the risk of damaging your credibility in front of a bunch of really smart people, and if they stop trusting you, the system's broken."

She tries to sift the important from the unimportant: "It's more than picking your battles. Marshaling your energy. It's about grace under fire ... all war metaphors. I guess that is it: Being able to tell when it's a matter of life or death."

The drama heats up. Imagine this picture: The entire White House Press Corps -- and C.J. and the White House staff -- rushes from C.J.'s news briefing to get the breaking news from White House television sets.

C.J. pushes through the crowd of reporters, and demands of her assistant: "Get me 10 minutes in the Oval Office. Call over there now!"

The problem comes to a head, and appears strikingly similar to an FBI foul-up earlier in the Bartlett Administration.

It Helps if Your Boss Understands the Media ... and Has Good Writers

C.J. tells the President, "I'll get on your schedule in the morning for final prep for questions you might get."

The media-savvy Bartlet: "I think we can guess what those questions are going to be."

Ah, but in the world of television drama, the problem is solved, with the potential for the Administration to come out all right.

Leo: "I counted six rounds you went with the rope-a-dope in that briefing."

C.J.: "I've started to take pride in it. That sounds sick &hellip;"

'Sometimes you have to just let yourself get beaten up'

"Sometimes you have to just let yourself get beaten up," she says, "but sometimes it's better to be beaten up for 24 hours than beaten up for the long run, although the long run is something I have no sense of. You know, when I'm going home at night, I'm thinking about the next day's schedule &hellip;"

Voice over: "C.J. Craig, who allowed us to share a day with her in the West Wing, remains the only woman to have served two terms as the White House Press Secretary."

It is the best show on television.

"The West Wing" is a copyrighted production (©2004) of Warner Bros. Entertainment Inc.