Our CornerBarPR.com® Words Guy recently received a reader question about grammar from a knowledgeable associate, whom we'll call Julie.

Julie: The one that's getting my goat lately is "that" used to describe people. "People that go to the park" vs. "People who go to the park." Am I being overly sensitive, or are we hearing more and more of this? Your thoughts?

The Words Guy's response: "That" and "who" certainly are misused more and more, Julie, but they're symptomatic of a much broader increasing disregard of grammar, usage, and common sense. The informality of blogs and other social media has highlighted and severely exacerbated the problem, which began its ascendency with email. Sending an email was so easy; you were your own editor, and, really, who cared if your grammar or syntax were incorrect?

Well, I did. And most folks with a background in editing or journalism did. And, indeed, most reasonably well-educated readers or recipients did.

Then, this informal incorrectness slipped into business writing; but careless or clueless writers -- and job applicants! -- didn't understand why it was bad, or why it was affecting their careers.

My best sense of what I read is that "its"/"it's" remains the most egregious and widespread error. It's a problem so simple to overcome, but if the writer doesn't care to devote the additional two seconds to think, well, he reinforces an impression of incompetence.

I could go on and on about this -- indeed, I have! -- but, before I close, allow me a nod in the direction of one of my favorite categories of serial misusers: sports writers. Here's an excerpt quoted from a previous Commentary by our Chief Curmudgeon: 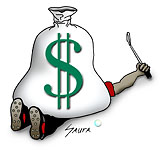 Of course, this endorsement stuff can go a bit haywire if a sports reporter gets hold of it. An article in The Kansas City Star last year didn't report the dollar value of a new spokesperson gig for Tiger [Woods], but it did say, "for comparisons [sic] sake, Woods has a $100,000 million, five-year sponsorship deal with Nike Inc."

Either the power of inflation has struck, big-time, or we have another example of a sports reporter frantically trying to figure out how to report real news.

Thanks for your question, Julie. That's it from The Words Guy.

The Words Guy uses words frequently ... and has done so for a long time.  He also has conducted extensive research on words. That means, he has stolen the definitions and explanations from many sources and edited them together into Words Guy prose. He hopes he has added enough original material and creativity to avoid The Copyright Cops, because, after all, the mistakes he decries are common, and the best explanations of how to avoid them have similarities.